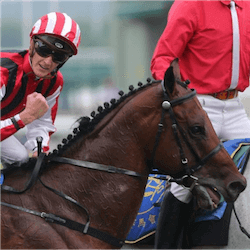 Trainer Tony Millard suffered a major disappointment when he had to withdraw Nassa from the Hong Kong Cup a week before the December 10 race. After not seeming in contention for the race at all, the five-year-old had put in some extraordinary performances to qualify, only to succumb to a tendon knock that required rest and treatment.

Speaking to reporters after the withdrawal announcement, the South African-born trainer, now transplanted to Hong Kong, remained fairly philosophical, saying: ‘That’s racing,’ and vowing to take it on the chin and move on.

However, he could be forgiven for nursing an unspoken frustration, having worked the stallion back into contention after Nassa was ranked in the lower half of Class Two little over a month ago, and seemed too far off to qualify.

That all changed with his Group 3 win in the Ladies Purse and third placing in the Gr. 2 Jockey Club Cup; both run, like the 2000m Hong Kong Cup, at Sha Tin racecourse.

With 18 points for the win and seven for the place, the combined 25 points put the stallion back in sight of qualifying for the December 10 race. Then his tendon injury ensured that all the hard work was in vain.

Online sports betting enthusiasts in South Africa, half a world away, will be just as disappointed that Nassa dropped out of the Hong Kong Cup as Millard is. The son of legendary South African trainer Terrance Millard, Tony had already established his own credentials as a trainer in his homeland before his migration across the Indian Ocean.

Nassa likewise has a blended African-Asian history; he was foaled at the Wilgerbosdrift Stud in Western Cape, sired by South African stallion Dynasty out of Chinese dam Cosima Liszt. He has been racing in China, owned by Hong Kong’s Siu Pak-kwan, since 2016, and has a career record of 12: 3-0-3.