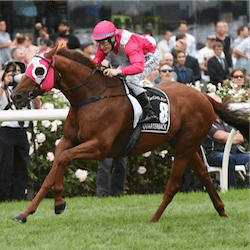 Sports betting fans eyeing Australia’s popular Newmarket Handicap, which always garners lots of attention at the VRC Autumn Racing Carnival, won’t be too disappointed to see the field shrink to 15; it improves their odds of backing a winner in the famed sprint at Flemington on Saturday, March 10. The latest horse to be cut from the line-up is Hey Doc.

Trainer Tony McEvoy decided to take the four-year-old gelding out of contention for the 1200m Group 1 sprint because he exhibited stiffness and soreness in his pectoral muscles after a poor showing in the Lightning Stakes. McEvoy thinks he may have strained something overreaching out of the gate or ‘doing the splits’, so he’s getting a spell.

Hey Doc, with two Group 1 wins in his 8 firsts from 19 starts, is the third horse to be scratched from the Newmarket Handicap since the weights were set.

Chautauqua and She Will Reign Out Too

Many punters were hoping to see if champion Chautauqua had another epic sprint in him, as the seven-year-old gelding is perhaps past his prime. The 2018 Newmarket Handicap is not going to be that race, however.

After refusing to leave the barriers in a trial at Randwick last week, he’s not allowed to race until he’s completed a barrier trial successfully. Co-trainer Michael Hawkes may even be relieved that the ageing star isn’t running at Flemington on Saturday, as he would have been labouring under top weight.

Three-year-old filly She Will Reign is also out of the running, because trainer Gary Portelli doesn’t think it’s the right race for the Golden Slipper Stakes winner.

All Three Set for Moonee Valley

Although they won’t be in action at Flemington on Saturday, all three horses withdrawn from the Newmarket Handicap will be in contention two weeks later at Moonee Valley night racing, in the William Reid Stakes. Hey Doc will be one to watch; he’s won all three races he’s started on that track – including last year’s Gr. 1 Manikato Stakes.

In the field remaining in the Newmarket, Merchant Navy is the betting favourite at $4.00, with a good draw in Barrier 4. Second favourite at $5.50 Brave Smash is jumping off from Barrier 2, while Redkirk Warrior at $6.00 will have to work hard from Barrier 15 on the outside rail.