No William Reid for Chautauqua 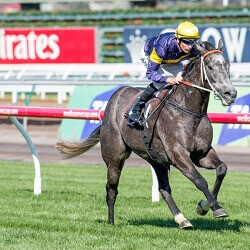 Chautauqua will not be taking part in the William Reid Stakes next week at Moonee Valley after all. The Hawkes stable, however, has indicated that the well-known sprinter will now take part in a trial at Cranbourne on Monday.

Chautauqua, who has to trial twice in order to lift the embargo that was put in place last week by Racing New South Wales, was scheduled to jump out at Flemington today. A success here would possibly have allowed for Monday’s trial to be successfully overcome before racing next Friday evening.

But the Hawkes have chosen to rule out William Reed, and are placing their focus on the G1 T.J. Smith Stakes in Sydney instead. This is a race which Chautauqua has managed to win for the past three years, as a potential target first-up. The Hawkes let their decision be known on Thursday afternoon through tweets, indicating that, while they have made this decision, there is nothing wrong with the seven-year old sprinter.

A Failure to Jump

Chautauqua did not jump from the gates on two separate occasions, once at the February 27 Randwick trials and then at Rosehill on the 8th of March.