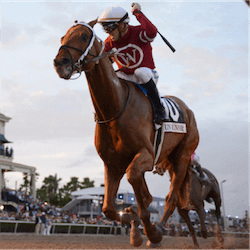 No horse in the field stood a chance against Gun Runner in the $16-million Pegasus World Cup at Florida’s Gulfstream Park track on January 27. West Coast in second place finished two-and-a-half lengths behind him. Gunnevera, in third, was 13-and-a-half lengths adrift at the finish of the 1800m race.

However, with Gun Runner now safely retired, both the placed horses could be worth a punt at the world’s second-richest race, the $10-million Dubai World Cup over 2000m. That’s if they’re entered in the final field.

There are currently more than 30 horses nominated, but sports betting enthusiasts can expect the numbers to be whittled down before the UAE’s premier horseracing event takes place at Dubai’s Meydan Racecourse on March 24.

West Coast is one of four horses trained by Bob Baffert, trainer of three Dubai World Cup winners including Arrogate last year, that could be in contention at Meydan this time. However, it looks less likely that Collected will remain in the Dubai field; after leading the Pegasus World Cup for much of the race, the five-year-old entire dropped back rapidly and finished seventh.

Baffert’s other two possibilities are Hoppertunity and Mubtaahij, but his strongest contender remains West Coast. On a career record of 10: 6-3-1, the four-year-old stallion has only been racing for a year, with the Travers Stakes and Pennsylvania Derby among his notable 2017 wins; he also finished third in the Breeders’ Cup Classic.

West Coast is leading early Dubai World Cup betting, at odds of around $2.50. Gunnevera, at this stage, is priced at between $14.00 and $25.00. The three-year-old colt, trained by Antonio Sano, turns four later this month, and his third place at the Pegasus brought his career record to 14: 5-3-1.

Gun Runner Retires on a High

Gun Runner won’t be racing in the 2018 Dubai World Cup, as the four-year-old has been retired to stud at Three Chimneys Farm. He ran a brilliant race to go out on, starting off tucked in on the rail behind Collected, who set a brisk pace from the jump-off. He timed his move in the final turn perfectly, to surge far ahead of the field.

That added the richest race in the world to his trophy case, ending on a record of 19: 12-3-2 and total career earnings just shy of $16-million.