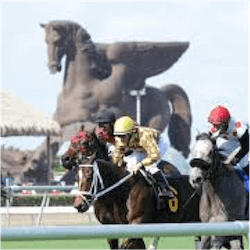 Winchell Thoroughbreds and Three Chimneys Farm, owners of US stallion Gun Runner, have announced that the Pegasus World Cup in Florida on January 27, 2018, will be his last race. The four-year-old entire will then retire to stud at Three Chimneys.

A victory in the Pegasus World Cup would put the cherry on top of a stellar year and an impressive career for Gun Runner. Since winning his maiden race over a mile (1600m) in September 2015 at Churchill Downs, he has racked up career statistics of 18: 11-3-2, and he ran fifth in the remaining two.

Five of those wins have come from the six races he’s run in 2017: the Razorback Handicap at Oaklawn Park, the Stephen Foster Handicap at Churchill Downs, the Whitney Stakes and then the Woodward Stakes, both at Saratoga, and the 2017 Breeders’ Cup Classic at Del Mar Racetrack.

In the Dubai World Cup at Meydan Racecourse in March, he ran second to Arrogate. Many are tipping him to be named 2017 Horse of the Year at the 47th annual Eclipse Awards, hosted by Gulfstream Park:  the same Hallandale Beach, Florida racing and casino complex at which the Pegasus World Cup is run.

The awards will be held two days before the race, on January 25, so Gun Runner might end up starting his swansong already wearing laurels.

Only the Second Pegasus World Cup

The Pegasus World Cup was only inaugurated in 2017, but it claimed the attention of punters worldwide immediately by starting out as the richest thoroughbred horse race on the planet. The total prize money in 2016 was $12-million (that’s US dollars), outstripping the $10-million Dubai World Cup.

The purse for the 2018 Pegasus World Cup has been bumped to an astronomical $16-million, with a field of nine from 12 possibilities confirmed so far, so it is likely to provide exciting betting action online.

The race is run on a dirt track over an unmetricated American 9 furlongs, or one-and-one-eighth of a mile, roughly equal to 1800m, and is open to four-year-olds and older. Horses and geldings carry 56kg handicaps, and mares 54.5kg.

Gun Runner may well end up the favourite by the time they jump off. The other eight confirmed starters for the 2018 Pegasus World Cup, as of December 22, are Collected, Gunnevera, Seeking The Soul, Stellar Wind, Toast Of New York, West Coast, War Story and a yet-to-be-named entry from the Adena Springs stable.