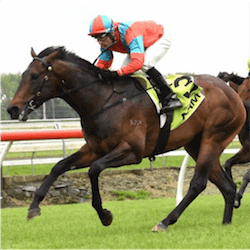 Perth race-goers will have Perfect Jewel marked down as a filly to watch, after she took her fourth win in five career starts at the Group 2 WA Guineas at Ascot on Saturday. She started as joint second-favourite in the betting, at $6.50, but had to deal with a hideous barrier draw of 14.

Jockey William Pike took his third win of the day, after riding Zuccheros to victory in the Listed Carbine Club of WA Stakes, and winning the Listed Jungle Mist Classic aboard sprinter Celebrity Dream. He managed to get Perfect Jewel tucked into fifth coming up to the turn in the 1600m WA Guineas, pulling ahead of Art Series to take the lead in the final 100m.

The WA Guineas win is the highlight so far of a stellar debut year for the filly, trained by Grant and Alana Williams. Debuting as a two-year-old in July, she took a win in heavy going in her maiden race at Belmont Park: the Vili’s Plate, a 1200m sprint.

After a 10-week let-up, she won again over 1200m in the Tabtouch Handicap at York in October, followed by another three-week spell. The Williamses have been careful not to over-race her, and she started in just two more races before the WA Guineas.

In the 1200m Listed Belgravia Stakes on October 28 at Ascot, she won again, followed by a fourth-of-11 finish in the 1400m Listed Burgess Queen Stakes on the same track 10 days later. Her win over 1600m in the Guineas, her first black type race, has laid to rest any fears that she may be a sprinter only.

The three-year-old might yet be able to squeeze another victory, and another milestone, into her year before it ends. Talking to reporters after her Guineas win on Saturday, owner Bob Peters said he was considering Perfect Jewel for Ascot’s Kingston Town Classic on December 9.

If she is in the Kingston field, it will mark another two career firsts: her first Gr. 1 race, and the longest distance she’s taken on to date, at 1800m.