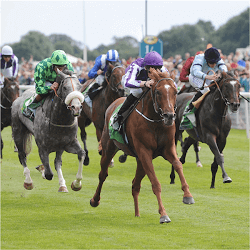 The Peters Investments-Kingston Town Classic Day is world-class racing event held at Ascot Racecourse in Perth. The race itself is a Group 1 weight-for-age thoroughbred horse race for three- year-olds and over. It is run every year in December. The Kingston Town Classic forms part of the Perth Summer Racing Carnival and attracts visitors from all over the country. The race is named after the horse Kingston Town who has been inducted into the Australian Hall of Fame.

The Peters Investments-Kingston Town Classic Day race is held two weeks after the famous Group 1 Railway Stakes and one week after the Group 2 Winterbottom Stakes. The Kingston Town Classic race is the main feature middle distance racing event in the Perth Summer Carnival. It closes out the season being the final group 1 race of the year. Since 2004, the race is run over a distance of 1800 meters. In 2015, the total prize money was increased to $1,000,000.

The Peters Investments-Kingston Town Classic Day race is the third group 1 race to take place during the Perth Summer Racing Carnival. It attracts quality horses from around the country with plenty of local horses to bring in the crowds. The event attracts visitors from all over the country to place bets on local and interstate horses. The horses that come through to the Kingston Town Classic generally come via the Group 2 WA Guineas, the Group 1 Railway Stakes or the Group 2 Lee Steere Stakes.

The 2016 Peters Investments-Kingston Town Classic Day will take place on Saturday the 3rd of December at Ascot Racecourse in Perth. The total prizemoney for the 2016 race will be $1,000,000. The winner of the Kingston Classic usually goes on to compete at the Group 2 CB Cox Stakes which is run over a distance of 2100 meters. The previous three winners include Perfect Refection in 2015, Moriarty in 2014 and Ihtsahymn in 2013.

Last year, Perfect Reflection blew away the completion in the Group 3 WA Champion Fillies Stakes which was run over 1600m before going on to win the Kingston Town Classic. There have been four double-winners which include horses that have won the Peters Investments-Kingston Town Classic Day race as well as the Railway Stakes. These include Better Loosen Up in 1989, Old Comrade who won in 2001, Modem to won both in 2004 and Sniper’s Bullet who achieved the feat in 2009.