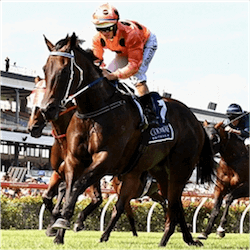 Price’s Colts To Return At The Lightning Stakes

Flying Artie and Extreme Choice are set for a fantastic performance at this year’s Lightning Stakes according to their trainer, Mick Price. The two three year old colts have had a relatively relaxed spring which Price believes will give them the edge in the upcoming events set for the autumn racing calendar.

Price stated that the rest they received in the spring has allowed them to recover and build muscle and the results are plain to see when he sees them in warm ups.

Price’s Flying Artie was the winner of the Coolmore Stud Stakes last year and he is set for his lightning stakes performance as well as showings in the Newmarket Handicap and the TJ Smith Stakes.

Price has stated that he believes Flying Artie will be a great track horse, having seen his development over the spring. It is hard to argue with Price as Flying Artie is currently the rated 120. This is only two points behind the current top rated horse, Chautauqua.

Extreme Choice on the other hand does not have the size of Flying Artie but the spring break has clearly done him good as he has added allot of muscle to his frame. He is set to add to Price’s group 1 victories by showing at the Moir Stakes.

Price said that when Extreme Choice raced at the Slipper he was at 417kg and he has been built up to 475kg. Price said this growth has extended to the horse’s personality as well.

Extreme choice has developed from a quiet horse, or as price describes him, an “altar boy”, to a confident masculine stud that looks set for big things.

It may be much too early to compare the two horses however. Price said that the two horses are not set to meet anytime soon, but potentially the two will meet later in the autumn races.

Unfortunately Price’s other star stud; Lankan Rupee will not be seen in any races this year. The horse was rated the top sprinter two years ago but has since hot some bad luck.

Lankan Rupee is currently dealing with suspensory problems picked up in the spring races.

Price stated that he wants Lankan Rupee to race in the next spring events so he would rather let the horse fully recover before he races him again. Price has stated he wishes to give Rupee three to four months to recover after which he will be working to have him race ready by spring.