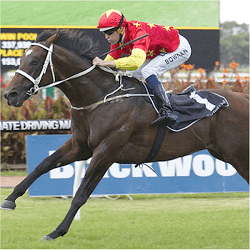 Press Statement is one of Australia’s most recent favourite thoroughbreds. He had a very successful racing career until the beginning of April in 2016, which was half way through his three-year-old season. He has now been retired to stud duties at Vinery Stud and is predicted to make a fantastic sire.

Press Statement left his trainer, Chris Waller’s, stable as the first Australian Group 1 winning two year old and three year old to go to stud since 2013. Vinery’s general manager Peter Orton stated that there is no other horse in the country with those credentials. Press Statement is right up there as the Hunter Valley’s most desirable first season stallion. He looks set to sire a fantastic first crop of foals and will be well worth keeping an eye on as a sire.

Press Statements brother; Pressday was retired to stud as a foundation sire in 2012. He proved very worthy, with his offspring winning over a number of distances. Pressday, unfortunately, died of a tumor on his spleen, which leaves Press Statement as the main sire of his current line.

Press Statement was, from the beginning, a super fast colt. Chris Waller ran him in a two-year-old stakes at Canterbury Park as his fourth race along with two other of Waller’s horses. He blazed past them, proving himself a much better quality horse at two years old than both of the other two.

After a brief one month freshening, Press Statement went on to win two more races at Rosehill Gardens and Doomben. The going varied from good to soft, proving the colt not only fast but versatile too.

Press Statement’s three-year-old season passed in a blur of wins and places. He ran twelve times, with three firsts and six places. Conditions ranged from soft to good to even heavy, with the colt running on anything that was put under his hooves. In total Press Statement has made over one million Australasian dollars in prize money, making him a part of the elite class of thoroughbred.

The Caulfield Guinness in 2015, which was run over 1600 meters, saw Press Statement romping home easily with yards to spare. He beat Lizard Island and Ready For Victory to take the million dollars in prize money.

Press Statement’s trainer, Chris Waller is the name behind super mare Winx. He has trained a large number of horses in Australia, many of whom have been winners over various distances.  Chris began his career in New Zealand and brought one horse to Sydney for his first hit and run attack. Party Belle was a young mare who proved her trainer’s talent, and they went home a winner. Following that, Chris made more frequent trips to Sydney where he stayed at Rosehill before eventually making the move to Sydney permanent. Since then he has trained a great many horses and is known in the highest circles of thoroughbred racing in Australia.