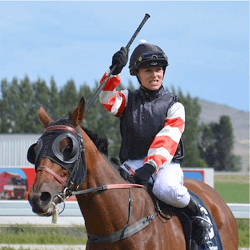 Kiwi jockey Rebecca Black began the day like any other racing jockey, a little nervous but mostly anticipating an adrenaline rush aboard an incredibly fast horse. The race meet at Gore Racetrack was one of the Christmas Celebration races held each year around Christmas time. Black’s race was late in the day, which is when the more important races are held. She had a ride aboard the horse Point Proven, a bay gelding that was foaled in Australia, but trained in New Zealand by Greg Wright

Rebecca Black apparently had the choice of two horses for her ill-fated race at Gore on that Sunday afternoon. She chose her favourite, a bay gelding by Keeper. Point Proven was one of her favourite rides, and even graced her cell phone as the screen saver. She had ridden the horse before on a number of occasions, including a win at Gore in February 2016.

The race was going well, with Rebecca and Point Proven on the rail and ready to make their move. Just as they were about to, Point Proven knuckled forward, stumbling onto his knees. He recovered, throwing himself back but not before Rebecca was thrown from the saddle. Misscattlecreek, the horse who unfortunately was behind Point Proven had nowhere to go and tried to jump over the stricken gelding and his rider.

The mare did not quite manage the jump, landing n Rebecca who was still down. Point Proven got up and away from the fall, as did Misscattlecreek’s jockey Terry Moseley. Misscattlecreek and Rebecca Black did not however.

Black was pronounced dead a few minutes after her fall. The ambulance and medics raced to her side, but there was nothing to be done for the forty-year-old jockey who had ridden for Greg Wright over thirty times. She has sustained major head and neck injuries and was pronounced dead at the scene. Point Proven miraculously had only minor injuries and it seems that he will race again.

Rebecca Black had three children, two on whom were at the track on the day of the accident. They were giving pony rides to children on ponies owned by Black when they heard the news. Black was purportedly thinking of giving up her racing career in favour of simply taking trails and giving riding lessons.

The horse behind Point Proven, Misscattlecreek, had nowhere to go when the bay gelding fell and tried to jump over him. She didn’t make it, however and fell herself. She sustained a fracture of her off fore knee, which is a life-ending sentence to a horse. Horses cannot usually be healed from broken limbs due to their weight and general build. If the fracture or break is of a small enough bone, for example the sesamoid or the navicular, it is possible to stable rest them provided they have the mentality to do so. A fractured knee, unfortunately, cannot be healed.

The news of Black’s tragic death has shocked the racing community and she’ll certainly be greatly missed.