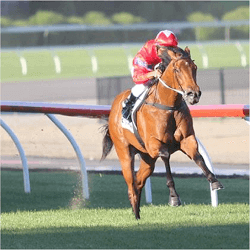 Saturday’s Robert Sangster Stakes at Adelaide’s Morphettville Racecourse saw Melbourne mare Secret Agenda take her first Group 1 victory, her fourth overall in 15 races. The 4-year-old ran an exceptional race, despite starting from a barrier draw of 16 out of 20, and rewarded the faith of any punters backing her with a $15.00 return.

Out of the gate smartly in the 1200m sprint, Secret Agenda surged across the track to the front of the pack immediately, and jockey Damien Oliver let her run. She maintained her lead despite a fast-finishing challenge from Adelaide mare Viddora, to win by a length-and-a-quarter. Third place went to another Victorian filly, I Am A Star.

The race is Oliver’s second Group 1 win, and trainer Mick Price’s fourth victory at the Robert Sangster Stakes. First run in 1983 as the Swettenham Stud Stakes, the race was renamed after late Swettenham luminary Robert Sangster in 2005. Since 2010, it has been known by a variety of sponsored names, and it was run this year as the Ubet Classic.

The boost in prize money for the 2017 Robert Sangster Stakes, to $1-million, makes it one of two million-dollar Group 1 sprints presented by the SAJC at Morphettville in autumn. The next is the Goodwood, scheduled for 20 April. Also run over 1200m, the Goodwood has a history going back to 1881, making it one of Adelaide’s most prestigious sprints.

Her win in the Robert Sangster Stakes sees Secret Agenda move up to $13.00 in the Goodwood betting, but the favourite is still last year’s Goodwood winner, Black Heart Bart. The 6-year-old gelding trained by Darren Weir is at $2.50, followed in the betting by Malaguerra at $7.00 and Vega Magic at $8.00.

If Secret Agenda is confirmed for the Goodwood, she could also be up against two more Weir-trained contenders, Voodoo Lad, offered in ante-post betting at $9.00, and Hellbent, at $11.00. Hey Doc and Illustrious Lad are two other geldings that can’t be ruled out at this stage, either. Both are currently being offered at $11.00.