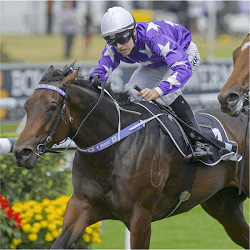 Rock Magic Keeps on Bringing in the Wins

Rock Magic is one of the old guard and legends of Australian horse racing. He was still racing in 2016 as a seven year old, where he beat many of the youngsters at the Winterbottom Cup at Ascot, coming in third behind Takedown and Sheidel. He has had an incredible 36 starts, almost all of which were places. This horse is one that’s proving age is nothing but a number, and it’s clear that his future could still have plenty of wins still waiting to happen.

Trained by Chris Gangemi, Rock Magic’s career isn’t over just yet with his trainer considering a try at the Melbourne Autumn Carnival campaign after his third place at the Winterbottom Stakes. The horse has been steady in his placings pretty much since he began racing and seems to have no signs of stopping yet. He shares his old guard status with Takedown.

Rock Magic actually suffered a quarter crack in his near fore before the Winterbottom Stakes that almost saw him pulling out. With a superhuman effort from farriers and vets, the gelding was cleared to run just before the race. He was not totally 100% but ran a great third anyway, showing his heart and spirit. He will be rested for a good few weeks in a paddock to totally heal that injury before he is run again. He has so far earned over eight million dollars in his racing career.

Rock Magic is a laid back thoroughbred with a great work ethic. He enjoys running over the long distances, often getting into his stride just when the others have fallen out. He runs best when ridden patiently and respectfully and allowed to hang back until the right moment. His placings record speaks for itself, and the great team that he and his jockeys have made in the past.

Rock Magic began his career as a two year old at the Muswellbrook Race 2. Soft conditions over 900m with no weight saw him romping home in his field of six. From there, there was no looking back with almost every race being a place.  His 2013 season ended with an 11th at the Darley Bush Fire support race at Randwick. Clearly, the gelding needed a respite, which he got for 146 days.

Refreshed, the bay came back to own every race he took part in until November 2014 when he came eighth at the Winterbottom stakes. By now Rocky had already run a group three race, with the 2014 Winterbottom Stakes being his first go at a group one race.

After a further spelling of 147 days, he raced a further ten times coming no less than sixth. Two firsts, three thirds, a fourth three fifths and a sixth made up the rest of the season until he again had a rest.

Rock Magic’s seven year old season has been nothing less than phenomenal, with two firsts, three seconds and a third. He shows no sign of wanting to retire, and experts suggest keeping an eye on this legend as he still promises great things.