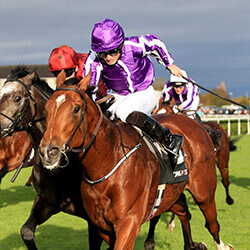 Saxon Warrior, a once famous racer that turned heads early in his career, is showing signs that he may be ready to take on the Dubai Duty Free Irish Derby, which will be taking place at the Curragh. Adion O’Brien has told reporters that he believes the horse is ready for the Derby, and that fans will see more improvement over time.

Saxon Warrior, the son of Deep Impact, showed great promise thanks to victory in the 2000 Guineas, which took place at Newmarket. Many believed that his victory had the potential to lead the racer to a Triple Crown win. But the dreams were quickly shattered at Epsom when he finished fourth in the Investec Derby. O’Brien nonetheless maintains that it was a learning experience for Saxon Warrior, and that he’s confident the horse will fare better in the Irish Derby thanks to its more conventional track.

O’Brien went on to say that the racer seems good so far, and that Donnacha’s training has proven that he’s ready for the Irish Derby, and that the whole team was looking forward to it. He added that Warrior ran a good race at Epsom, but he was still a little babyish and that he was new to the experience after having only run on conventional tracks previously.

Other racers to be expected at the Irish Derby include Dee Ex Bee, a runner-up from Epsom that missed the Royal Ascot but is primed for the upcoming Derby event.