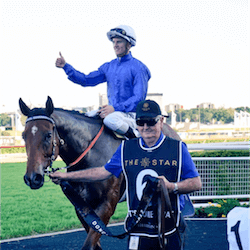 Trainer John O’Shea’s 5-year-old gelding It’s Somewhat is the current $4.50 ante-post favourite for the Doomben Cup, due to be run at Brisbane’s Doomben Racecourse on 20 May. With a purse of $650,000, the Group 1 race over 2000m has outstripped the 2400m Group 2 Brisbane Cup as Queensland’s most important race for stayers.

The weight-for-age Doomben Cup for three-year-olds and older is also one of the key races in the early stages of the Queensland Winter Racing Carnival, and with the autumn racing wound up in Melbourne and Sydney, it is likely to attract an excellent field.

It’s Somewhat started the year with two convincing wins, in the 1500m Group 2 Ajax Stakes at Rosehill for the second year in a row, and in Randwick’s 1600m Doncaster Mile, which was his first Group 1 victory. Australian betting fans will watch Saturday’s 1800m Hollindale Stakes at Gold Coast racecourse in Surfer’s Paradise with interest, to see how the US-born gelding is shaping up in Queensland.

A number of other stayers fancied for Doomben are also running in Surfer’s Paradise on 6 May, and the Hollindale should reveal which of the favourites has the staying power for the extra 200m in Brisbane. In both races, It’s Somewhat faces a challenge from 4-year-old gelding McCreery; currently second-favourite in Doomben Cup betting at $6.50.

However, 4-year-old mare Single Gaze is right behind them in the Cup betting at $8.00, and she is also on the card for the Hollindale Stakes. She and jockey Kathy O’Hara were both injured in a bad fall at Randwick’s Australian Oaks last April, but recovery and rehab saw them resume racing in February this year. They celebrated their first win of 2017 in the 1600m Mandate Tails Quality at Doomben on 17 April, so a good performance at Gold Coast this Saturday could bode well for them in the Cup.

Sense Of Occasion and Articus, currently on offer at $9.00 and $11.00 respectively, are also set to race in both events. Their performances in Surfer’s Paradise could, however, see those odds change before the Doomben Cup.