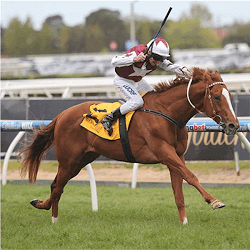 The 2016 Peters Investments-Kingston Town Classic was always going to be an exciting race. With Scales of Justice drawing barrier 16 and Stratum Star in lane 1, it was shaping up to be race that could have punters on their feet. As it turns out, the Group 1 race was filled with excitement, jubilation and controversy. On the day, it was trainer Darren Weir who celebrated with his fully rejuvenated stallion Stratum Star crossing the finish line half a head in front of the Railway Stakes winner Scales of Justice.

The Melbourne trainer had three horses campaigning in western Australia this season without much success. That is until jockey Damian Lane charged down the Ascot straight to claim victory with a perfectly executed ride on the five-year-old stallion. Positioning the stallion behind Macintosh, Damien Lane had Scales of Justice stuck on the outside and found a clear open space to make the charge for the finish line. Winning by just the narrowest of margins, Weir was filled jubilation, celebrating wildly with his closest friends and family.

Controversy Over Change in Riding Style

However, the Weir camp celebrations were soon overshadowed by the controversy surrounding jockey Douglas Whyte who was riding Scales of Justice. Having worked his way forward from barrier 16, Scales of Justice looked to have the clear advantage in the straight before coming up against Stratum Star. With just a few meters to go, it appeared Whyte changed his riding style, earning him a quick summons to the steward’s room.

Brad Lewis, the Chairman of stewards, interviewed Whyte regarding his change in riding style in the final 20 meters of the race. Whyte maintained that he had resorted to using his hands and heels instead of the whip in order to get his horse across the line. The drastic change in style has resulted in a formal charge in failing to ride out Scales of Justice in the final two strides. The horse was beating by just a half head with Stratum Star just crossing the line to take the honours.

Reviewing the footage, chief steward Brad Lewis contacted Scales of Justice trainer Lindsey Smith. She maintained that Whyte had ridden the horse well throughout the races and was happy with his change in tactics in the final stages. Whyte has since flown back to Hong Kong but will take part in a conference call hearing later this week.