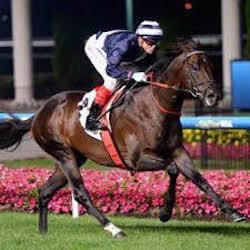 A bit of a rest has obviously done Supido the world of good. The 5-year-old ran the worst race of his career this March in The Galaxy at Rosehill, finishing 13th of 14. However, he wiped out that blot on his otherwise stellar record on Saturday, winning the Sir John Monash Stakes at Caulfield to take his stats to 13: 7-1-2.

It was a personal triumph for trainer Mick Kent, as the entire already had Group 1 and 2 wins under his belt, but the Group 3 Monash was his first stakes win. Already the favourite, Supido went to odds-on at $1.70 after the withdrawal of second-favourite Chocolate Holic shortly before the race.

The visitor from Perth might have been out, but another tourist delivered a surprise in second place. Outsider Daytona Grey, the 7-year-old Adelaide gelding, was challenging hard on the inside at the finish of the 1100m sprint, and finished three-quarters of a length behind Supido, rewarding bolder punters with $20.00. Murt The Flurt was a neck behind him at $9.00 in third.

Chocolate Holic One of Two Scratchings

It was to have been the first run at Caulfield for Western Australian sprinter Chocolate Holic. The 4-year-old gelding, now trained by Darren Weir, was the $5.00 second favourite for the Monash, until a hoof abscess forced his withdrawal. Hopefully, he’ll be fit again for the Bletchingly Stakes at Caulfield in two weeks.

The other scratching for the Monash was gelding O’Malley, trained by Enver Jusufovic. The field was already small to begin with, but the two withdrawals made for a very tight eight-horse race.

There was drama earlier on in the day, when jockey Dwayne Dunn copped an 18-meeting suspension for interference, ending his 2017 season. He pleaded guilty to a charge of careless riding on Windbern on his way to win the 2000m Laming Racing Handicap, after making contact with Meat Traders at the 200m mark and causing interference with four other horses.

Luke Nolen can also be glad he was aboard Supido to win the Monash; it will be his last for some time. In the first race on Saturday, he was found guilty of careless riding on Dane Thunder, and has now been suspended for eight meetings too. The third suspension of the day for careless riding was handed to apprentice Chris Caserta, riding Rockmeartie in the third race.