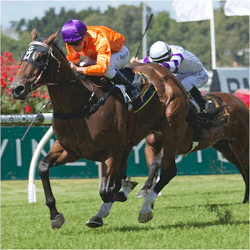 A record-breaking crowd braved the sweltering heat to witness Takedown’s surprise win at this year’s Winterbottom Stakes which took place at the Ascot Racecourse in Perth.

Jockey Tim Clark, from Australia, who returned from Hong Kong back in 2014, has joined forces with lively trainer Gary Moore to make his first Group One win in Australia, and take the first prize at Crown Perth Winterbottom Stakes Day, the second of the three $1 million Group One Races in the TABTouch Masters.

Over 6 000 people made up the spectators, and watched as Clark, a previous champ apprentice for NSW, won his second Group One race and be part of Takedown’s first Group One win. Clark is having an extraordinary two-month winning streak currently, having come first at three races at Ascot Racecourse in his very first appearance there.

Chief Executive Officer of Perth Racing Julian Sullivan was reported as saying that this win had been a wonderful result for country horse racing, and the surprise element added to the excitement levels of an extraordinarily successful Crown Perth Winterbottom Stakes Day.

Perth Racing Gets Put Back on the Map

The TABTouch Masters is going about its business of making sure Perth racing is put back on the map, as it brings the high-quality Thoroughbred racing and flare of the latest fashions to the field. Along with thrilling Group One racing, the Ascot Racecourse also hosted the WA Country Cups Fashion the Field final. Sarah McEwan, the Pilbara Regional finalist, ended up in first place; the first runner up was the Wheatbelt Final’s Elizabeth Winlo; and second runner up was the Bunbury Cup’s Wildcard Winner Elicia Anders.

Mr Sullivan stated that the theme for the TABTouch Masters was “seriously good times” and that, judging by the experience reported by the thousands of people who turned out for them, this is exactly what was accomplished.

Perth Racing rolled out the red carpet for another capacity crowd of roaring racegoers through its Ascot Racecourse gates on Saturday the 3rd of December, for the TABTouch Masters Peters Investment Kingston Town Classic races. Champion Victorian trainer Darren Weir managed to reach yet another milestone in his incredible career when he went on to win the Group One races with his stallion Stratum Star. He was jubilant, with the win being a very narrow one, and leaped into the air when his horse’s number got semaphored and he was declared number one.