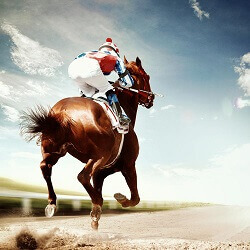 Last year’s winner was the older mare and winner of the Longines Breeders’ Cup Dirt, Forever Unbridled, and she will be gunning for history at this year’s Dubai World Cup.

If she manages to win the race she will be the first filly or mare to accomplish the feat that has been attempted by three-time champion Royal Delta. Win or lose, however, this is the 6-year old’s swansong, and she will be visiting the runner-up for the 2004 World Cup, Medaglia d’Oro, upon her return from the desert.

Dubai adores Mubtaahij, and the sentiment is returned. The winner of the 2015 UAE Derby will return to Meydan this week, to a track he is very familiar with: he’s raced it ten times, won four of these, and placed three times.

Under Bob Baffert currently, it could be said that he is making a return in the finest form of his career. Mubtaahij won his first Grade 1 race last fall, and has managed to hit the board in three of the four races he’s been in since then.

Talismanic, the winner of last year Longines Breeders’ Cup Turf, is going to be trying something new this Saturday -it will be the first dirt track this horse has attempted. He has added a couple of air miles to his card since the Breeders’ Cup, finishing in second place in the Hong Kong Vase in December before heading home to France and winning his season debut by 1 ¾ lengths on the Polytrack.