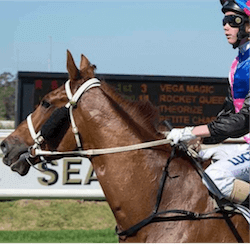 The Goodwood has been a feature of Adelaide’s autumn racing since the 1880s, and with the prize money boosted to $1-million this year, the 2017 Darley Goodwood over 1200m was undoubtedly one of the iconic sprints of the season. It was run at Morphettville on Saturday, and the strong field of 20 sprinters gave betting fans plenty of options.

Many were hoping that last year’s Goodwood champion, Western Australian gelding Black Heart Bart, could repeat his win in the 2017 Darley Goodwood, a double that has not been accomplished in more than 100 years. As a result, the Darren Weir-trained 6-year-old started the race the tote favourite, at $4.

Unfortunately for them, it was another Perth gelding, Vega Magic, who romped home on Saturday, at $4.80. The 4-year-old is trained by the Hayes/Dabernig trio for the Lindsay Park stable, and the win brings his record to an impressive 10 wins from 15 starts. Black Heart Bart, sadly, finished a lacklustre seventh.

Melbourne jockey Craig Williams had an amazing day on Saturday; The Goodwood was only one of the four wins he achieved in eight races. With Vega Magic out the gate fast and competing strongly, he got the muscular gelding perfectly positioned in the pack.

Despite a challenge from $31-outsider Missrock, Vega Magic put on a great display of strength to charge ahead if the field in the final 100m, winning by three-quarters of a length. The win boosts his prize money to date to more than $1.3-million, and it is clear the WA champion could be destined for even greater heights.

Punters with a place bet on 6-year-old galloper Casino Wizard, who started the race a rank $61 outsider, would have been thrilled by the magnificent run he pulled off to finish third.

Co-trainer David Hayes, celebrating The Goodwood result, told reporters that Vega Magic may yet be in contention for Australia’s richest race, the $10m Everest at Randwick in October. However, he has yet to discuss this with the Lindsay Park owners, so it’s early days yet.

However, Vega Magic is nominated for two races coming up at Eagle Farm in Queensland: the Darley Kingsford Smith Cup on 27 May, and the Ubet Stradbroke Handicap on 10 June. If he keeps those appointments, betting fans should consider backing him.