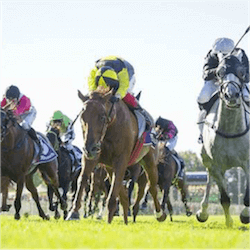 The Perth Cup was a family affair at Ascot on New Year’s Day; trainer Justin Warwick got to watch his daughter, Lucy, race home in the 2400m Group 2 open handicap aboard Material Man. It was a second Perth Cup win for Warwick, who trained 2014 winner Black Tycoon.

The Perth Cup was 20-year-old Lucy Warwick’s first win at the distance, and her longest to date. It also made her only the second female jockey to win the Cup; the first since Kyra Yuill piloted Western Jewel home ahead of the rest in 2011.

The win takes Material Man to a career record of 20: 11-4-1, with the six-year-old gelding’s prize money topping $1.3-million. He ran a strong race from start to finish, pulling well ahead in the final 200m, and then fighting off a storming challenge from Pounamu in the dying moments to clinch the win by a nose.

Warwick told reporters he was particularly pleased that owners Michael MacDermott and his wife, Jill, could be there to see Material Man win, as it’s an indication that MacDermott is well on the mend after treatment for lymphoma, diagnosed in 2014.

Despite delivering one of the most thrilling finishes in the Cup’s history, Pounamu’s loss would have been a bitter pill for trainer Alan Mathews and veteran jockey Patrick Carbery, who has ridden Pounamu in all 11 of his wins.

Mathews has built the 6-year-old up patiently into a winner in the two years since the gelding arrived from NSW, and Pounamu had already beaten Material Man into second twice at Ascot this season, winning the G1 Kingston Town Classic and G2 Ted Van Heemst Stakes in December.

Still, Mathews can’t have been too gutted; Warwick’s two Cups hardly compare to his six. Despite losing a seventh by the tightest of noses, he won’t fault the combined efforts of Pounamu and Carbery either.

They wove through the pack like masters and then thundered down the straight, giving Material Man a serious run for his money at the finish. Another 50m might have made a world of difference, so it’s unlikely Pounamu’s won his last race at Ascot.