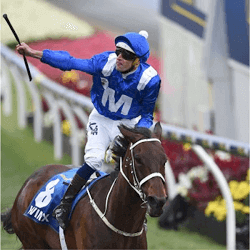 After a pulling off the biggest win margin in Cox Plate history, Winx’s Timeform ratings have soared above Sunline and Makybe Diva. The sensational eight-lengths win at Moonee Valley complimented her track record win in the same race just one year ago. Overall, this was the mares 13th consecutive win and her ninth at group 1 level. Her total prize money has risen to a phenomenal $9.348 million putting her third on the list of all-time leading prize money winners.

Going into the Cox Plate, experts predicted that Winx would have had to produce something special in order to beat such a top-class field including the likes of Hartnell. On the day, no one expected her to win by such a convincing margin, clearly showing her dominance in the field. Having taking her 13th consecutive win, Winx’s Timeform ratings have shot up into the leagues of the Australian greats. The horseracing Timeform ratings are international barometer used by handicappers and racing experts to compare a horse’s form on an international level.

After winning the Cox Plate, Winx’s Timeform ratings have increased from 128 up to 133. This puts her ahead of the 2000 Cox Plate winner Sunline and Melbourne Cup winner Makybe Diva who are both sitting on 129. To get to her new 133 Timeform rating number, many factors were considered including seasonal split analysis, race times as well as the quality of the field. Winx is now the second highest rated mare, closing in on the unbeaten Black Caviar who is rated at 136. This also puts her on equal standing with champions So You Think as well as might and power.

Speaking about the race, experts said that Winx’s dominance was truly outstanding. She completely outclassed the three last-start group 1 winners. It is now thought that Winx could even improve her rating further with the mare not having reached the bottom of her ability. The Cox Plate star now joins European champion Almanzor as well as the Japanese galloper A Shin Hikari as the three highest Timeform rated horses in the world currently still racing on turf. On a global scale, Allez France, Black Caviar and Habibti share the honour of being the highest rated mare or filly in the history of the Timeform Ratings.