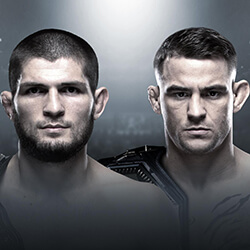 Khabib Nurmagomedov will be entering the ring for the first time since his fight with Conor McGregor, and will be facing Dustin Poirier at UFC 242 that takes place in Abu Dhabi later this year in September. Nurmagomedov, who a UFC lightweight champion, beat McGregor at UFC 229 in October last year, and extended his unbeaten record to 27-0.

The 30-year-old Russian was then given a fine and subsequently banned for a total of nine months after he got into a brawl following the beating of his Irish opponent. 30-year-old Poirier now has the interim title after he bested fellow American Max Holloway in April.

The championship fight is expected to take place early in September. Nurmagomedov had originally claimed the lightweight crown in April of last year after a unanimous decision win against Al Laquinta. He held on to that title in October after he fought against McGregor, and forced him to tap out during the fourth round before he jumped the fence and began fighting with the teammates of is rival. McGregor then went on to fight with the Russian cam, where a number of brawls broke out and officials were forced to intervene to stop the fights.

McGregor was then suspended fro a total of six months and given a $50,000 fine by the Nevada Athletic Commission for his role in the fight. Nurmagomedov, on the other hand, was given a nine month ban and a fine of $500,000.