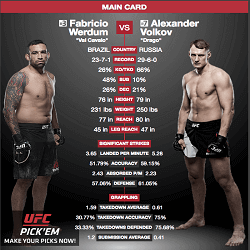 On the 17th of March Fabricio Werdum and Alexander Volkov will headline at UFC Fight Night 127 in London at the O2 Arena. It will be the 10th time the UFC visits London and MMA fans are in for a treat when these 2 fighters take to the octagon to battle it out.

The event will air live on UF Fight Pass and can be streamed online; and along with Fabricio Werdum and Alexander Volkov there are several other MMA stars who will be showing off their mettle. A total of 10 fights are listed to date, but there may be a few surprise additions closer to the time, as is typical of UFC organisers. Excitement is already reaching fever pitch however, and after the success of UFC 222 in Vegas, fans are amped for the night big fight.

Former division champion Fabricio Werdum is also prepped and ready for his showdown with the always-dangerous Alexander Volkov, and ‘Vai Cavalo’ is braying for blood as he wants to colllect his 3rd straight win, and secure a much-desired shot at the coveted belt.

Co-headlining UFC Fight Night 127 on the 17th is Jimi Manuwa and Jan Błachowicz, and this fight also promises to deliver, as light-heavyweight Manuwa last scored a unanimous win over the Pole in 2015. These two fighters both have very conflicting styles, but when facing off they seem to complement each other well, and are a good match.

For MMA fans it looks like Fabricio Werdum and Alexander Volkov and Jimi Manuwa and Jan Błachowicz and all other fights taking place at Fight Night 127 will offer action aplenty.