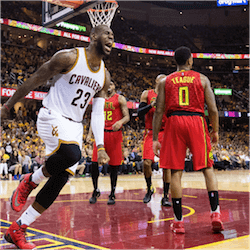 Wednesday saw the final spots in the 2016-17 NBA Play-Offs decided, with two weeks left until the Conference Semi-Finals begin on May 1. From 16 to 30 April, the top eight teams in each NBA conference will battle it out, to decide on the final teams going through to the semis.

The Finals only begin in June, but there is more than enough action promised in the Play-Offs to keep Australia’s basketball punters happy until then. There is also lots of talent at the top of each conference table, so finding the winners in each match-up will make for some intriguing betting.

The 30 teams in the NBA, divided into the Western Conference and the Eastern Conference, play 82 games over the regular season. So any team that makes the final eight in each conference should have a win-loss record of at least 41-41, although it needs to be a lot higher to make a team worth betting on.

Several teams in the final 16 did not perform that impressively in the regular season. The last teams to qualify in the Eastern Conference, the Chicago Bulls and Indiana Pacers, squeaked through with records of 41-41 and 42-40.

The Milwaukee Bucks, another Eastern Conference survivor, is also on 42-40. In the Western Conference, the Portland Trail Blazers on 41-41 and the Memphis Grizzlies on 43-39 are not inspiring much confidence either.

Favourites from the Conference Ladders

In the Western Conference, the Golden State Warriors led the field on 67-15, and have to be considered the favourites to take the championship this year. But the San Antonio Spurs were hot on their heels with 61-21, followed by the Houston Rockets on 55-27. The Los Angeles Clippers and Utah Jazz also finished the season on 51-31.

This Sunday, the safest teams to bet on look like the Celtics against the Bulls, and the Warriors against the Trail Blazers. Both conference leaders might also be solid bets to make the Conference Semi-Finals on 1 May.