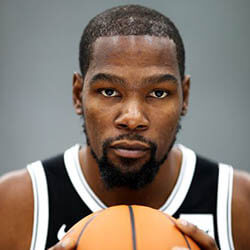 Durant, score-trailing only behind Jerry West (27.03), LeBron James (27.07), Elgin Baylor (27.36), Wilt Chamberlain (30.07), and basketball great Michael Jordan (30.12) is himself a member of the ultimate score A-league. At 27.02 averaged per game throughout his professional career, he will go down in history as one of the league’s most dangerous scorers of all time.

His greatest individual achievement was his average of 32 points per game during his 2012/13 run with the Oklahoma City Thunder – turned even more phenomenal by his super-human 51% shooting from floor-level, 41.6% from three, and nearly unthinkable 90.5% accuracy from free throws.

These statistics place Durant on a list so exclusive that only eight players in the history of the NBA have ever had their names successfully added. Kevin Durand’s name appears among those part of the 50-40-90 club.

At 208cm tall, many regard Durant to be a basketball god in his own right. His unique set of skills, the way in which he moves across the hardwood, and the jumps that leave him resembling a surreal sort of blade slicing through the air like a hot knife through butter, have made of him a true NBA enigma. And yet, he wants to hear nothing of being compared to basketball great Michael Jordan – let alone pitted against him in the race for being named the ultimate GOAT scorer.

Michael Jordan is one of a kind and a man and player at god-level, replied Durant on Thursday to a fan on Twitter – right before asking him to leave him (Durant) out of the MJ conversation.