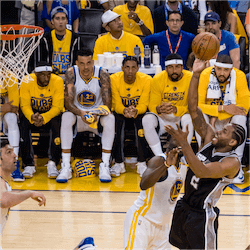 In the same imperious style that made them Western Conference Champions and took them to the NBA Finals two years running, the Golden State Warriors have managed a clean sweep of their opponents in the 2016-17 NBA Conference Finals. They made short work of the San Antonio Spurs, winning the first four games of Western Conference Finals to clinch the seven-tie series, robbing Australia’s basketball fans and online punters of three games in the process.

The victory gives the Warriors their third Western Conference title in a row, and some betting enthusiasts might decide they have the edge in the 2017 NBA Finals starting on 1 June. In 2015, after all, they proved they are quite capable of turning a Conference title into a National championship

Celtics Hang on Grimly against Cavaliers

Before Aussie punters go all-out backing the Warriors in the 2017 NBA Finals, however, they should consider that as in 2015, the Warriors were also Conference champions last year; but in 2016, they didn’t convert it to a national championship.

The team that beat the Warriors last year, but lost to them in the 2015 NBA Finals, is currently still the favourite to win the Eastern Conference championship: the Cleveland Cavaliers. So we could well see a replay of the past two years’ NBA finals in June.

Two games in to the Conference Finals, it looked like the Cavaliers were also going to sweep the Boston Celtics, the once-legendary side in a decade-long slump. The Celtics haven’t won a Conference title since 2010, or an NBA Championship since 2008, and after 117-104 and 130-86 losses to the Cavaliers in Boston, it looked like 2017 wasn’t going to be their year either.

But with LeBron James having his worst game in five months for the Cavaliers in their next clash in Cleveland, the Celtics fought back with a 111-108 win that stunned the home crowd. At the time of writing, the players were warming up for Tuesday’s second game in Cleveland, but even if the Cavaliers are back in championship-winning form, it will also take Thursday’s fifth tie back in Boston, at least, to settle the Eastern Conference Finals.