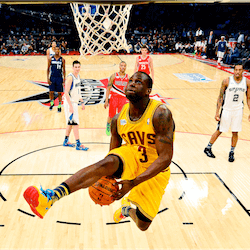 This weekend, Australia’s basketball fans will be focused on the last matches of the 2016-17 NBA Conference Semi-Finals. The Boston Celtics and Washington Wizards were tied up at two games all in their semi-final, so it will take at least two more meetings, and perhaps a third, to decide which of them goes through to the Eastern Conference Final.

The Celtics and the Wizards, at the time of writing, were set to play on Wednesday, 10 May, Friday, 12 May, and if a seventh match is required, on Monday, 15 May. The other Eastern Conference finalist is the Cleveland Cavaliers, who breezed through the semis by dispatching the Toronto Raptors in four straight games.

The Cavaliers will now meet either the Celtics or the Wizards in the Eastern Conference Finals, set to start on 1 June.

Warriors Through in Western Conference

In the NBA Western Conference Semi-Finals, San Francisco’s Golden State Warriors also remained undefeated in four successive games, against the Utah Jazz, to make the Conference Final easily. They may already have a confirmed Final match-up with the San Antonio Spurs; at the time of writing, the Spurs were 3-2 up in their semi-final against the Houston Rockets, and about to play their sixth match on Thursday, 11 May.

If the Rockets win that game and draw level, the decider is scheduled for Sunday, 14 May. With the Spurs missing guard Tony Parker thanks to a knee injury, this semi-final could well stretch to the maximum seven games. But whether or not it does, and whichever teams end up making the two Conference Finals, Australian punters will know one way or another by Tuesday.

The Western Conference Finals, like all the other NBA knock-out rounds a seven-leg contest, also begin on 1 June, and many punters will be leaning towards the Warriors, no matter which of the Texan teams go through.

After the Conference Finals, the two Conference champions will then face each other in another seven-leg final, to determine the 2016-17 NBA Championship winner.