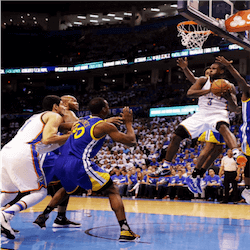 With the first round of playoffs already done and dusted, we are one step closer to finding out who will go through to the all-important semi-final stage of the Western and Eastern conferences. All things considered, this year’s playoffs weren’t supposed to provide that much suspense. After all, The Warriors and the Cavaliers seemed destined to meet in the finals for the third straight year. However, there is a spanner thrown into the mix with Kevin Durant picking up and injury during a time when the Cavs need him the most. Could we be seeing something a little different this year.

In the first round of the playoffs, The Grizzlies went down to the Spurs 111-82, while the Jazz defeated the Clippers 97 to 95. So what can we expect to see from the rest of the teams? In the Western Conference, we have a matchup of the Spurs versus the Grizzlies. Most people think the Spurs have it in the bag. However, the Grizzlies should not be written off just yet. When they are playing well, Memphis have some excellent offence which means that on a one-on-one basis, they have the potential to give San Antonia a good run for their money.

Looking at the Rockets verses the Thunder; this is where things get tricky. Experts are divided on this one. The Rockets have the third best record in the regular season. However, the Thunder has a few individual payers that are in line for the MVP. The two teams have contrasting styles, and strong offence in both cases. At the end of the day, putters would put their money on the Thunder.

In the Eastern Conference the Celtics take on the Bulls. If there was any game that was completely divided, it is this one. The Celtics are the least dominating side to hold the number 1 seed. Based on how they played leading up to the finals, Boston are definitely rated for the win. On the other hand, Chicago has some serious firepower and a good track record playing in the finals.

Looking at the Raptors versus the Bucks, almost everyone thinks that the Raptors have the edge here. That being said, no one thinks it will be an easy game. There is a bit of scepticism floating around about Toronto’s defence. The bucks have also earned a lot of respect this season however, Toronto have a better set of midseason upgrades.

Back in the Western Conference, the Warriors take on the Trail Blazers. Not many people rate the Blazers chances of putting one over the Warriors. Most of the money is going to be on the Warriors claiming a clean sweep. Portland did manage to take one game from the Golden state in 2016. But at the time Stephen Curry wasn’t on court and Kevin Durant was not in town. Things should be a bit different this time around.