NBA Conference Semi-Finals in May 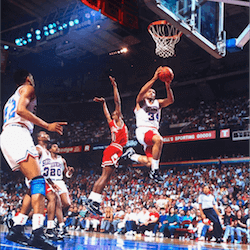 NBA Conference Semi-Finals on 1 May

Like gridiron football’s NFL, the USA’s NBA runs the country’s major annual tournament on a two-conference system: the Eastern Conference encompassing the Atlantic, Central and Southeast Divisions, and the Western Conference that comprises the Northwest, Pacific and Southwest Divisions.

As the two conference champions will meet in the NBA Finals starting on 1 June, the Conference Semi-Finals are obviously hugely important to betting fans. Australian punters have been enjoying the 2016-17 basketball betting action since October, and there are four weeks left in the regular season for them to assess the contenders for the Playoffs, Semis and Finals.

Some Early Favourites in the Betting

With lots of regular-season action still to come, online sports betting enthusiasts still have a wide-open field of possibilities to back for a berth in the Playoffs. A lot can happen in four weeks, and seven or eight teams in each conference are still vying fiercely to make it into the top eight.

Three teams in the Western Conference are already assured of spots in the Playoffs, however. Two are from Texas: the San Antonio Spurs on a 52-14 win-loss record, and the Houston Rockets on 46-21. A California team leads the Western Conference: San Francisco’s Golden State Warriors on 53-14.

In the Eastern Conference, no team has a definite Playoffs berth yet, but the three division leaders look unlikely to falter at this stage. Ohio’s Cleveland Cavaliers top the rankings on 44-22, with Massachusetts’ Boston Celtics close behind on 42-25. D.C.’s Washington Wizards are breathing down their necks on 41-25, so all three look set to make the Playoffs.

Betting enthusiasts looking for a strong early bet might consider backing all six of these teams to make the Conference Semi-Finals on 1 May.