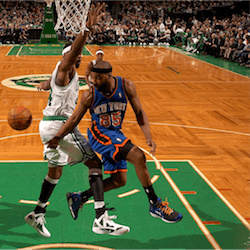 Australian basketball fans watching the 2016-17 NBA season in the US and looking for a plucky underdog to deliver lucrative upset wins at long odds have, by and large, been disappointed. The four teams now remaining in the Western and Eastern Conference Finals were first and second seeds in each of their conferences at the start of the season.

The first team to qualify for the NBA Conference Finals was the Cleveland Cavaliers, who were seeded second behind the Boston Celtics in the Eastern Conference after the regular season. The Cavaliers made short work of their semi-final opponents, the Toronto Raptors, knocking them out in four straight games.

The Celtics were the only semi-finalists to require the full seven games to defeat their opponents, the Washington Wizards. Just when the Celtics got a game or two ahead, the Wizards would equalise, until Boston finally managed a 115-105 home win in their seventh game. Most bookies don’t think they have enough to win the Eastern Conference Finals, however, and the odds are favouring the Cavaliers.

San Francisco’s Golden State Warriors were the top-seeded team in the Western Conference at the start of the play-offs, and they lived up to that reputation with a brisk 4-0 victory over the Portland Trail Blazers in the first round, and another clean sweep against the Utah Jazz in the semis.

The Warriors’ opponents in the Western Conference Finals are the San Antonio Spurs. Although not as impressive as the Warriors in the play-offs rounds, the Texas team was at least consistent: they beat both the Memphis Grizzlies in the first round and the Houston Rockets in the semis 4-2.