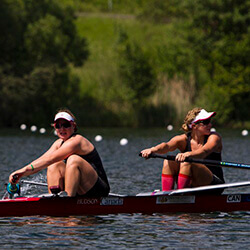 Canadian rowers Hillary Janssens and Caileigh Filmer celebrating after winning gold at the World Rowing Cup, held in Serbia. The two performed extremely well in the women’s final at Belgrade, leaving all their competitors behind.

The Canadian team overtook the previous leaders, Rebecca Girling and Merlott Chitty, with a 36 stroke rate and left Netherlands, Spain, and Britain to battle it out for second place.

Janssens, who comes from Cloverdale, British Columbia, told reporters that her and her teammate had a good start, and decided to not hold back in an attempt to get ahead of everyone else participating. She went on to say that they had excellent training, and that for the rest of event they will depend on what their coach has planned for them.

The Canadian rowers had trained hard before the event, aiming to do better over their performance from last season, which earned them a silver medal eight, which is thanks to their coaches, New Zealand’s Dick Tonks and Dave Thompson.

On the men’s side of the competition, the men’s lightweight double team from Canada, which consisted of Patrick Keane and Maxwell Lattimer placed fourth in the A final with a time of just over six minutes. They then went on to beat the 2017 world champions from Ireland, taking second place in the semifinals with a finishing time of 6:23:02.