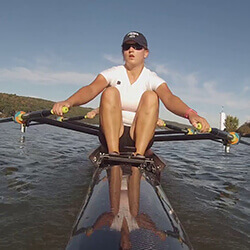 Ithaca College junior rower Pearl Outlaw is set to take part in the 2019 World Rowing Championships, which are being held in Plovdiv, Bulgaria. Outlaw, who will be participating in the event, was born with a rare genetic condition known as retinitis pigmentosa. The condition caused her to be born with some colour and light receptors in her eyes not functioning correctly, rendering her partially blind. It’s a degenerative condition that will see her eyesight deteriorate over time.

A natural athlete, Outlaw has taken part in a number of swimming and rowing competitions, such as the Para Rowing International, where she earned fifth place, and has now set her focus on the World Rowing Championship. She will be accompanied by her guide dog and her parents, who will be watching her race.

Outlaw will be pairing with Josh Boissoneau, and the two hope to make it into the top two. If they do, they will be able to advance to the finals. If they miss the top two, the pair will be able to compete in the repêchage, which will allow them to qualify for the finals. It’s the first international event for Boissoneau, and the second for Outlaw, and their goal is to get out on the water and try their best.

Outlaw has explained in an interview that she has dreams that stretch beyond the world championships, and says that she hopes she will be able to compete within the Paralympics within the next few years.