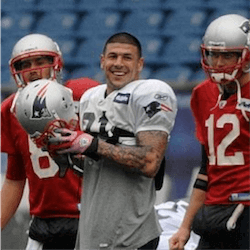 Prison officials found the body of Aaron Hernandez hanged in his prison cell at the Souza-Baranowski Correctional Center on Wednesday morning at 3.05am. The ex-NFL star had committed suicide with a bedsheet attached to the window of his cell in the general population ward, where he had tried to block the door to his cell by jamming it with various objects. Staff at the UMass Leominster Hospital attempted to save Hernandez’s life, however he was pronounced dead at 4.07am. Hernandez’s death comes just days after he was acquitted of the double homicide of Safiro Furtado and Daniel de Abreu, who were killed in a drive-by shooting outside of a Boston nightclub in July 2012.

At the time of his death, Odin Lloyd was dating the sister of Shayanna Jenkins, the fiancée of Hernandez. On 17th June 2013, a jogger found the gunshot-riddled body of Lloyd in a Massachusetts industrial park less than a mile from Hernandez’s house. Hernandez was arrested for the murder 9 days later and instantaneously released from his position with the Patriots. In April 2015, Hernandez was sentenced to serve life in prison for the first-degree murder without the possibility of parole.

On the Friday before his death, Hernandez was acquitted of the double murder charge for which he was accused of in May 2014; however, he was convicted of illegal possession of a firearm. Hernandez’s attorneys were planning to turn their attention to putting together an appeal for the Odin murder conviction, and were hoping to get the conviction overturned.

The Rise and Fall of Aaron Hernandez

Aaron Hernandez’s football career started in his hometown of Bristol, Connecticut and he went on to play for the University of Florida, where he was instrumental in the success of their 2008 national championship win. Even though his early career was riddled with allegations of failed drug tests, Hernandez was picked by the Patriots in the fourth round of the 2010 NFL draft. Hernandez quickly proved himself as New England’s latest rising star and he was rewarded with a 5-year contract extension worth almost $40 million. However, less than 1 year after was signing the contract, Hernandez was charged with murder and soon found himself unemployed, behind bars – a tragic end to once promising career of fame and fortune.