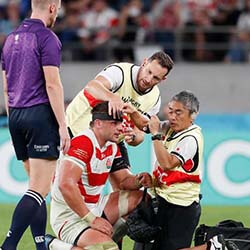 Modern-day rugby players should not consider themselves exempt from the possibility of developing the same neurological disorders as former players of old as a result of injuries to the head while playing the game. So said the lawyer representing a group of former players in an intended action against the Rugby Football League.

According to Richard Boardman, who is representing the group of former test rugby internationals, despite the fact that many of the players involved in the case have been retired for many years, the risks for brain injuries remain as high now as at any point in the past. He said this week it’s imperative that positive changes be made now.

Boardman furthermore referred to a study by the Drake Foundation claiming that 23% of all elite rugby players tested had indeed presented with some degree of brain damage. The mean age for the purpose of the study had been only 25, he explained.

While the primary focus of the legal action is obviously on the retired players, Boardman said the hope was that it would also lead to a greater awareness and more preventative measures being put into place for safeguarding current and future generations of players.

In an answering statement recently released by the Rugby Football league, the organisation says it takes player welfare and safety “seriously”. The league said it would continue to enhance its approach with the help of medical science and research.