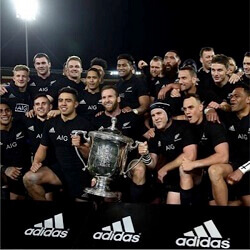 All Blacks Speak Out About Wallabies Rugby Tactics

On the back of their recent win, the All Blacks have spoken out about the Wallabies niggling rugby tactics. The soon to be All Black captain, Sam Cane has created more animosity between the two teams, saying that the Wallabies strange tactics helped seal their fate in the Bledisloe Cup. The Wallabies suffered a crushing defeat with their fifth consecutive loss of 2016, losing 29-9 against the All Blacks in Wellington.

The defeat meant that the much coveted Bledisloe Cup stays firmly in the hands of the Kiwis for the 14th straight year. To make matters worse, the humiliating 20 point defeat came on the back of one of the Wallabies poorest performances of the century, with the Aussies walloped 42 points to 8 in Sydney. In speaking about his recent win, Sam Cane said that the Wallabies decision to make a physical statement played right into their hands.

Australia Lost Focus on the Game

The Kiwis knew that Australia were going to play a physical game with what was described as the potential for a bit of a niggle. The way the Australian’s first came out caught the All Blacks off guard. However, the experienced team quickly acknowledged the Aussie threat and adjusted their game accordingly. The team explained that in a way, the bullish tactics meant that the team was less focused on the game, and more focused on dominance. This gave New Zealand the upper hand and the ability focus on playing the game.

Brodie Retallick, who is considered to be one of the world’s best locks added that the All Blacks saw Australia’s tactics as a weakness. He went on to say that there is a line where, as a team, you have to stand up and realise you are not going to take it. He explained that it would be pointless if it distracted you for the game itself. Buoyed by their victory, the All Blacks return home on Monday to prepare for their first test game against the Pumas in Waikato.

While the All Blacks are looking for their 14th straight win, the downhearted Wallabies are desperate to break their losing streak. The team is currently fighting critics both on and off the field with the captaincy coming under fire. It remains to be seen whether they’ll improve in the near future, and fans, punters and bookies are keeping tabs on their upcoming matches.