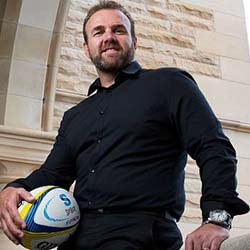 After a concordant seal of approval by the Rugby Australia board, Andy Marinos will be taking over the position of Chief Executive Officer for the body in 2021. He is stepping into the new role after five years in the same position for SANZAAR, which oversees the Super Rugby and Rugby Championship competitions in Rugby Union Games. It was here that he was called upon to guide the venture from its base in Sydney through the muddy waters of the novel coronavirus COVID-19 amidst a rapidly changing broadcasting landscape.

Hailing from Zimbabwe, Marinos has gathered extensive knowledge of the community game in Australia. He volunteers regularly at his community club and his commitment to developing grassroots games is in line with RA’s intention to foster the sport’s roots.

Marinos is a former professional player, entering the scene as a member of the Natal Sharks pre-1994. He also represented the Sydney Bulldogs, now Canterbury-Bankstown, in 1996.

Marinos will be more than able to contribute to RA, starting at the most basic level, moving up through the school game, right up to the top level with the finest teams in the country. Thanks to his time at SANZAAR, Marinos will be able to draw on a firmly established relationship with the Brumbies, Rebels, Reds, Waratahs, and the Western Force.

He will also bring his experience in Europe to bear, dating from the period that he spent in Wales as CEO for the Dragons from 1999 to 2004. He was also a Member of the Board of the Welsh Rugby Union.