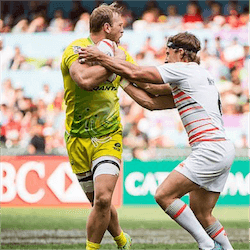 Australia’s World Rugby Sevens Series fans are caught somewhere between hope and angst after the first tournament of the 2017-18 season.

The Dubai Sevens is the traditional opener to the competition, and Aussie punters were hoping we could do better than last year’s fifth, when we came undone in the quarterfinal against Wales.

Sadly, it was not to be. Although Australia beat Wales and Russia, losing only to Fiji in Pool C, this year it was England that pulled the plug, winning the QF 26-19. Kenya and Samoa were no match for the Aussies in the playoffs, luckily, but the result was another less-than-ideal fifth place.

Thing is, the Dubai result was closer than many realise. A lot of fans will agree with coach Andy Friend that in the final minutes of their games against Fiji and England, Australia were looking pretty unstoppable. With another 60 seconds or so of play, both results could well have gone the other way.

After being that close to a semi, the Aussies will be fired up to make the top four, at least, in this week’s fixture: the South Africa Sevens in Cape Town. They also have a demon to lay to rest. Last year in Cape Town, they lost to the Blitzboks, the USA and Argentina, winning only their matches against Russia and Uganda, to finish joint 11th with the Russians.

South Africa Sevens is not without its perils this year: Australia are drawn in the same pool as New Zealand and last year’s nemesis, the USA, along with Spain. If they make the QFs, they are likely to face England, Scotland or Argentina.

If Australia does make the semis in Cape Town, their next hurdle will be overcoming their hosts’ psychological dominance.

The Blitzboks had a brilliant Rugby Sevens season last year, and they have started the 2017-18 season off with a bang, going undefeated in their pool and beating Samoa, Fiji and New Zealand in the knockout rounds to take the trophy in Dubai.

Drawn in Pool A with Kenya, France and Russia, the reigning champions look like they could go into the QFs in Cape Town on another clean sweep, so they’re going to be hard to beat.