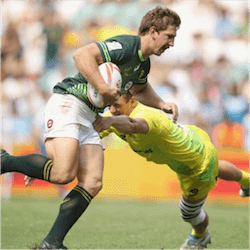 The last-but-two of the 2016-17 HSBC World Rugby Sevens Series, the Singapore Sevens at the Singapore National Stadium last Saturday and Sunday, provided some thrilling online betting action for Australian punters prepared to defy the odds.

Upsets were the order of the day in the quarter-finals, with series leaders South Africa knocked out by a tenacious Australian team, and Fiji, currently second on the ladder, falling to the United States.

Only a drop-goal after the final hooter, to beat Kenya 13-12, put England through to the semis. The East African side delivered their best performance to date, beating Argentina and Samoa in the pool stages, and coming within a whisker of knocking out England.

In the semi-finals, it was Canada that delighted some punters and shocked others, with a convincing 17-5 win over England. The Canucks went on to beat the USA 26-19 in the final, claiming an historic first WR Sevens trophy for Canada.

Sadly, the win against the Blitzboks was the last result in Singapore to please Australian punters. The USA pulled a blinder in the semis to beat us 40-7, and the Australia Sevens side ended the tournament in fourth after a 14-12 loss to England in the play-off.

Nevertheless, after an uneven series in which Australia has never finished higher than third, it was good to see the Sevens side defeat a traditional foe; one that was looking almost invincible earlier this season. The win also marks the first time that South Africa has lost a QF in a Sevens cup since May 2016, when they lost to Samoa in Paris.

Gaps Close at Top of Table

The big winners on the HSBC WR Sevens Series points ladder were, unsurprisingly, the teams that finished first, second and third in Singapore: Canada, the USA and England. Canada leapfrogged Scotland and Argentina into seventh place on the series ladder with 76 points. The USA remains in fifth with 101 points, seven points ahead of Australia in sixth.

New Zealand remains in fourth on 110, with England on 130, closing the gap with Fiji on 132, and South Africa on 157. The Paris Sevens will take place at Stade Jean-Bouin on 13-14 May, followed by the climax of the 2016-17 HSBC WR Sevens at Twickenham in London, on 20-21 May. If these two championships see the same giant-killing surprises we saw in Singapore, the top of the table could get very exciting.