Australia Expected To Make A Comeback 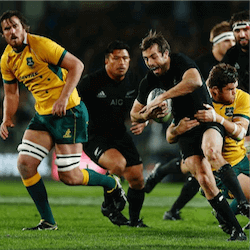 For most Kiwis, rugby is more than just a sport or a pastime; it’s a way of life. This certainly shows when considering that New Zealand is mostly at the top of the list when any competition that is even worth mentioning, goes down. It’s been like this for a very long time, with their supremacy always ultimately showing up at some point. Even when countries like Australia, England, and South Africa are involved.

But according to All Blacks winger Julian Savea, the immense Super Rugby gap between New Zealand and Australia is about to become smaller. Much smaller, in fact.

Australia Expected To Make A Come-Back

Last year wasn’t the most sterling of years for Australia. Not a single match against a trans-Tasman rival was won. Nothing in the bag to speak of, not even one. But Savea (Hurricanes) predicts that the 26-0 match losing streak won’t last for much longer and that Super Rugby New Zealand would be well advised to sit up and take notice.

When Change Is Good

Dramatic changes have been afoot in Oz-land, most prominent of all the controversial axing of the Western Force. Australia’s Super Rugby talent is now spread across four teams and no longer watered down to five. Immediate improvements are expected to be seen all round, especially in the camp of the Melbourne Rebels.

It all comes down to coach Dave Wessels, the new man in charge of the Rebels under the new structure.  Their days of being the easybeats in the family certainly are numbered, what with Wessels being notorious for turning things around in a big way.

Savea has said that it was a welcome change and that one team winning all the time wasn’t healthy for any sport, especially not at club level. It was demoralising to say the least. Savea said that the best thing about the Australian teams was their competitive nature, and that this was sorely missed last year. Now, however, the teams are looking a great deal stronger and the situation may very well return to being what it once was. Fans from all over the rugby world are no doubt looking forward to this, especially New Zealand and South African fans, who are regular viewers of Australian rugby.

On a more personal note, Savea hopes to regain his own Test spot this year after he was excluded from New Zealand’s Rugby Championship last year. Savea has however said that he would not be too disappointed it a re-inclusion wasn’t on the cards as in many ways, his time with the Wellington Lions has renewed his love of rugby.