Australia Second in the Rugby Championship 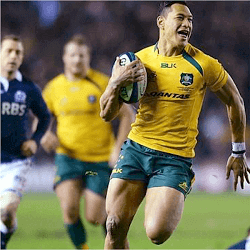 The Wallabies have secured second place in the 2016 Rugby Championship, finishing ahead of South Africa after New Zealand thrashed the Springboks 57-15. The Australia match, which took place in Twickenham was fraught with ill-discipline and physical play. From the start of the match, it was clear that Argentina meant business. After just one minute of play, Will Genia’s kick was expertly charged down, and the Pumas looked to open the scoring. It was not to be though, as the men in blue and white were offside.

It fell to the Wallabies to get the match underway as Adam Coleman flew over the line from a ruck after Dane Haylett-Petty’s spirited run down the right-wing. Australia surged to a 10-point lead when Foley booted over a penalty. The Wallabies spirits were soon dented as French referee Mathieu Raynal sent off flanker Michael Hooper in the 17th minute due to a high tackle. Making the most of the situating, the Pumas opened their scorecard after driving maul gave Alemanno the opportunity to push his way over the line.

Having just scored their first try, the Pumas failed to convert as Gonzalez Iglesias missed the posts. Soon the Wallabies were in trouble with the ref again, as Coleman was shown the yellow card in the 31st minute. With it all to play for, Australia added a second try through Kerevi before Argentina hit back with a penalty taking the half-time score to 18-8. In the second half, the Pumas were able to make use of the missing man after just five minutes of play. Taking advantage of a tapped penalty, de la Fuente charged over the line reducing the score deficit.

The conversion on the second try was a success, bringing the Pumas to within three points of Australia. It wasn’t long before Australia struck again. Hooper picked up a poor offload and his well-timed pass sent Kerevi down the field and over the line for his second try.

Riding on their success, Australia let their discipline slide giving away two additional penalties and bringing Argentina within four points again. Australia then sealed the deal when Mumm intercepted a long ball for a winning try.

The final score was 33-21. The win put Australia in second place in the Championship behind New Zealand, with South Africa taking third and Argentina claiming the wooden spoon.