Australia v Argentina: Do or Die 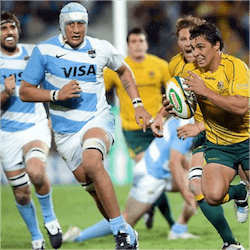 Argentina have beaten Australia on home soil exactly once in the two sides’ 27-match history: in July 1983 in Brisbane, when Hugo Porta and his team were putting the South American side on the rugby union map. Outside Australia, the Pumas have only beaten the Wallabies four more times, and they’ve managed one draw, in Buenos Aires in 1987.

Australia took the other 21 victories, so they are the obvious favourites in this Saturday’s 2017 Rugby Championship match again the Pumas at Canberra’s GIO Stadium. The home side are being offered at $0.20 or less at online sports betting sites, with Argentina at a much more tempting $3.00 and up.

Fighting to Avoid the Wooden Spoon

However, the Pumas might be a more formidable team than expected this year, and since both teams desperately need their first win of the tournament after three matches, Saturday’s match is sure to keep betting fans on the edge of their seats.

The Argentinians are currently bottom of the ladder, after losing their opener 37-15 to South Africa in the Nelson Mandela Bay Stadium. They went down to the Springboks again at home in Salta 41-23, and finally, in their best showing of the tournament so far, they were leading New Zealand by seven points, until the All Blacks piled on the pressure to win 39-22 in New Plymouth last Saturday.

While the Pumas have no points, Australia at least has 3: one from a losing bonus after they finished 35-29 to the All Blacks in Dunedin, in another match that saw New Zealand’s dominance wobble, and two from their 23-23 draw against the Springboks in Perth on Saturday. They took a resounding 54-34 pounding from the All Blacks in their first match of the tournament, but they’ve looked a somewhat stronger side since.

Can Wallabies Overtake Springboks in 3 Games?

Australia has three games left to play in the 2017 Rugby Chamiponship: two against Argentina and a clash with South Africa in Bloemfontein in two weeks’ time that will be pivotal. Three 5-pointers would allow the Wallabies to finish the tournament in second place; even the most optimistic Aussie punters might feel that New Zealand obligingly losing to the Pumas, then twice to the Springboks, is a bit too much to hope for.

If the Pumas win on Saturday, it will be their first victory against Australia since October 2014, and only their second in 20 years.