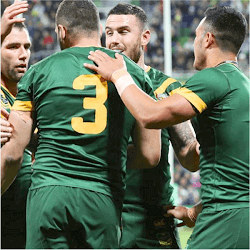 The Kangaroos have officially become the number 1 ranked side in the world after defeating New Zealand in the Four Nations final in Anfield. The Australian team crushed the shell-shocked New Zealand side in a dominant display of power and skill, stripping them of the title they won back in 2014. Mal Meninga’s team was the only side in the tournament to win every match. Their unbelievable display of ruby prowess has led the media to compare them the mighty All Blacks as the number 1 ranked side in the world.

It took just two minutes of play for the Kangaroos to make their intentions clear. Trent Merrin initiated the play when he hit a huge shot on Jordan Rapana, completely dislodging the ball and forcing a scrum. The scrum gave Darius Boyd time to find Blake Ferguson out wide with a brilliant cross, giving the Rooster’s playmaker the opportunity to put the Australian team ahead.

New Zealand soon responded with Adam Blair making a strong run with the help of Jason Taumalolo deep into the Kangaroos half. It was an inspired piece of play which ended when Shaun Kenny-Dowall dropped the ball with a clear path to the line. The New Zealand team got going quickly again with Shaun Johnson steaking forward. Hitting pressure from Gred Ingliss, Johnson’s pass fell short and was quickly swept up by Valentine Holmes who sprinted down field and ending up with a try courtesy of Josh Dugan.

The New Zealand team found themselves in trouble only a few minutes later when Merrin forced his way over the line from a set of play at close range. Johnathan Thurston added the two points and then played an expert grubber for Dugan to dark between the Kiwi defence and earn another two points for the Kangaroos. At the break, Australia lead by 24 points to 0.

The second half started with a bang as Boyd slid into the right corner to rack up more points for the Kangaroos. It took 55 minutes for the Kiwis to finally put points on the board with Jordan Kahu sliding his way over the line and again just a few minutes later. With five minutes to play, Boyd scrambled over the line to add another 6 points with a conversion by Thurston. The final score was 34 points to 8, putting the Australian team top of the world rankings.