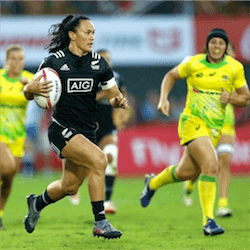 Australia’s Rugby Sevens fans have very little to brag about regarding the men’s team in the 2016-17 HSBC World Rugby Sevens Series. They have never won the championship, coming closest with a second place to New Zealand in 2000-01.

At the time of writing, Australia was fifth on the 2016-17 ladder after five legs, with five more left to play. Tournament leaders South Africa had a 55-point lead on 107, however, so it will take a few miracles to put the Aussies back in contention.

All is not lost for punters wanting to back the national side in WR Sevens, however. Australia Women, the current defending champs in the WR Women’s Sevens Series, are locked in a ding-dong battle with New Zealand that could see them retaining the title.

The Women’s Rugby Sevens, which has been a feature of the tournament since 2012-13, has only six legs instead of 10. Three have already been completed: in the Sydney Sevens, Australia Women were knocked out in the semis by Canada, and finished fourth after losing the play-off to New Zealand.

In both the Dubai Sevens and last weekend’s Las Vegas Sevens, Australia finished runners-up to New Zealand in the final. New Zealand will be the main danger in the next three legs, as the Black Ferns are undefeated so far in the tournament pool stages, with their loss to the USA in the Sydney semi-finals the only blemish on their 2016-17 record. They also won the championship for its first three years in a row, and finished runners-up to Australia last year.

However, with 50 points, Australia are only six points behind New Zealand on the Women’s Sevens ladder. Depending on the pools they are drawn in for April, May and June’s final three legs in Japan, Canada and France respectively, they are still in with a shot of unseating their trans-Tasman rivals and bringing the trophy home a second time.