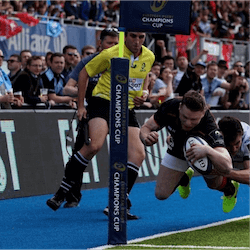 Round 1 of Aviva Premiership Surprises Punters

The opening week of the 2017-18 Aviva Rugby Premiership was topped and tailed by upset results that had Australian betting fans sitting up and taking notice. England’s top-flight domestic rugby union tournament may reward some counterintuitive betting choices this season, with one or two early contenders already challenging the heavy hitters.

Friday night’s tournament opener brought the first shock. Defending champions Exeter Chiefs played Gloucester, and after drawing first blood and leading at half time, the Chiefs looked on track for the win. Thanks to All Black Jeremy Thrush and England international Ben Morgan, however, the scores were tied, at three tries each, as full-time approached.

Then a last-gasp try from former Hurricanes back Jason Woodward, in his Gloucester debut, snatched even the draw from Exeter’s grasp, leaving punters with a bet on the underdog delighted by the 28-21 bonus-point win.

Falcons Start Out Second on Ladder

Neither Newcastle Falcons nor Worcester Warriors are rated likely to win this year’s Aviva Premiership by online sports betting sites, so Friday’s second match didn’t seem worth much interest. But in another turnaround, the match started with a bang four minutes in, when England’s Alex Tait went over for Newcastle.

However, first-half penalties and an equaliser from Welshman Josh Adams tied the scores by half-time. But three thrilling unanswered tries by the home side in the second half gave Newcastle a great bonus-point win for a maximum of 5, and a points-difference that leaves them second on the ladder behind the Saracens. They’re unlikely to stay there long, but it’s a great start.

Harlequins were $0.30 favourites to beat London Irish at Twickenham on Saturday. Instead, after an eight-try thriller that left both sides with a bonus point, London Irish came out on top 39-29. They’re fourth overall, with every chance of climbing higher during the season.

The biggest win of the weekend, as expected, went to Saracens. Their nine-tries-to-three annihilation of Northampton Saints leaves them top of the ladder on points-difference. The Wasps also scored seven tries against the Sale Sharks’ one, winning 50-35 and finishing third overall.

In the final surprise on Sunday, underdogs Bath beat odds-on Leicester Tigers 27-23, with three tries apiece. Rhys Priestland’s three conversions for Bath against George Ford’s one settled the matter. As a result, coach Todd Blackadder’s team finished Round 1 sixth on the ladder, behind Gloucester.