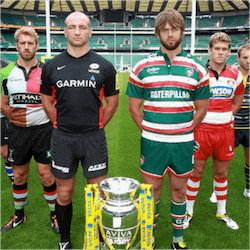 Friday kicks off another season of northern hemisphere rugby to entertain Australian betting enthusiasts; a welcome relief after last Saturday at Dunedin. The Aviva Rugby Premiership is England’s major domestic professional tournament, and the 2017-18 season features 12 rugby union clubs vying for the trophy.

Defending champions Exeter Chiefs will play the first match of the tournament against Gloucester on Friday. Since Gloucester finished a lowly ninth on the 2016-17 ladder, the Chiefs are unsurprising odds-on favourites, at around $0.60.

Aussie punters will be rooting for scrum-half Nic White. The New South Welshman will add valuable experience to the Devon team’s quest to retain the Premiership. In outright futures betting to win the tournament, Exeter are third-favourites, at odds of between $3.50 and $4.50.

Saracens and Wasps Top the Betting

Exeter have only been playing in the Premier Division for seven years, and their maiden 2017 triumph was quite a milestone. But North London’s Wasps have taken four premiership titles to date, and London rivals Saracens have won it three times and finished as runners-up twice.

Both these sides are ahead of Exeter in the outright futures betting. Saracens, under Irish coach Mark McCall, are tournament favourites, at between even money and $1.30. Six of their best players might take a while to recover from the punishment they took in the British and Irish Lions tour, though, so they could see a shakier start to the season than expected. For their first match against Northampton Saints on Saturday, they are nevertheless practically dead certs, at $0.23.

Leicester Tigers Also Worth a Look

The Leicester Tigers, coached by Australian Matt O’Connor, could also be worth a futures bet, at between $8.00 and $14.00. They’re at $0.45 to beat Bath in their first match on Sunday. Bath are coached by another Aussie export, Todd Blackadder. They’re at around $2.75 to win on Sunday, but ranked fifth behind the Tigers in outright futures, at $16.00-$20.00.

The other matches this weekend are Friday’s low-expectations Newcastle Falcons-Worcester Warriors clash, and Saturday’s match at Twickenham between London Irish and Harlequins. Harlequins are captained by another Aussie, Brisbane lock James Horwill, and they’re the favourites, at less than $0.30, to beat the Irish.