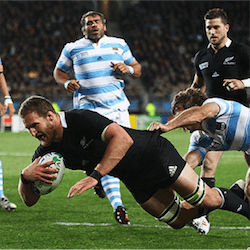 If Beauden Barrett was looking forward to another week off in the All Blacks’ penultimate 2017 Rugby Championship match, he’s been disappointed. The arrival of Lima Sopoaga’s daughter on Saturday means the Highlanders’ five-eighths is back home on new-dad duty, so the Hurricanes’ star has been called back into the side for this Saturday’s match against Argentina.

New Zealand stalwarts who are getting a rest this week include Sam Whitelock, Sam Cane, Liam Squire, Brodie Retallick and Ryan Crotty. They may be back for next week’s last All Blacks game of the tournament against South Africa, but in Buenos Aires on Saturday, the team will instead recall Jerome Kaino, Patrick Tuipolotu and Matt Todd, who all missed out on the slaughter of the Springboks two weeks ago.

Keiran Reed is back as captain, and the 28-man squad that arrived in Argentina for a week of acclimatisation on Saturday also includes experienced veterans like Sonny Bill Williams and Aaron Smith, as well as rising stars like Rieko Ioane. The squad is in for a long haul; the players currently resting will join their teammates in Cape Town for the South Africa match next week, and then all 28 head off on a tour of five more countries and six more games, four of them Tests.

The 2017 Rugby Championship doesn’t officially end until the Pumas and the Wallabies play their final match next week. However, it’s considered a foregone conclusion that the All Blacks have got this year’s competition sewn up, with New Zealand unbeaten in four matches on 19 points, South Africa on 11, Australia on 8 and Argentina on 0.

The only way the ladder leaders could be unseated would be through absolutely disastrous losses against the Pumas and the Springboks, without securing even a losing bonus point. And even if the Boks were to defeat the Wallabies in Bloemfontein this Saturday and surprise the All Blacks next week, they’d still need a five-pointer on one of those wins to draw ahead.

What seems far more likely, is New Zealand formally wrapping up the tournament with a victory against Argentina on Saturday, while the Australia v South Africa match decides second place. The All Blacks are being offered at around $0.05 on betting sites. At $8.00 and up, the Pumas would stupefy the bookies if they pulled off a shock upset.