All Blacks Fancied over Springboks 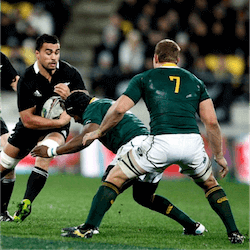 Springboks Always the Underdogs Against All Blacks

The last time South Africa beat the All Blacks in New Zealand was in 2009, when the Hamilton defeat was one of three that the Springboks dished out to their arch-rivals en route to the 2009 Tri-Nations trophy. Since then, the once-mighty Boks have been in something of a decline, culminating in last year’s record loss to the All Blacks in Durban and a dismal season in general.

The New Zealanders, in contrast, are consistently ranked the best team in the world, a title they have lived up to so far in the 2017 Rugby Championship, the four-nation successor to the Tri-Nations. With three wins and two try bonus points, they are rampant at the top of the ladder on 14 points.

It’s hardly surprising, then, that the home side were the odds-on favourites to win their match against the Boks last Saturday at the North Harbour Stadium in Albany. Sports betting sites online were  offering the All Blacks at $0.12 and below, in some cases as low as $0.05.

Can South Africa Shake the Label?

The Springboks seem to be coming out of their slump at last: they’ve played six internationals this year and won five of them, with one draw after they finished 23-23 against Australia in Perth last Saturday. They’ve beaten Argentina twice in the 2017 Rugby Championship so far, and are currently second on the ladder. A win could set them on the path to take the tournament.

With Francois Hougaard, Jean-Luc du Preez and Ruan Dreyer in the side to replace injured Ross Cronje, Jaco Kriel and Coenie Oosthuizen, they appear to present a strong challenge. But to paraphrase Mike Tyson, everyone has a rugby strategy, until they play the All Blacks…

It looks like the Springboks are saddled with an underdog label for the time to come, and will need a lot more than one win (which many would consider more luck than talent) to help them retain the status they once enjoyed as world champions.