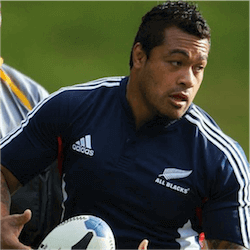 Australian rugby fans have been left reeling after the death of former All Black star Sione Lauaki was announced. The All Blacks and Australia have a long and intense rivalry, but the passing of Lauaki has reverberated across the rugby community. Lauaki, aged just 35 died on Sunday morning surrounded by family and loved ones. His death was felt across the sporting world and tributes continue to pour in from across the country.

In 2012, heath issues forced Sione Lauaki to stop playing top level rugby. It was since revealed that the former All Black was suffering from serious cardiovascular problems and chronic renal failure. His increasing health problems forced Lauaki to return to New Zealand where settled down, got married and had been living in Rarotonga.

Lauaki started his rise to rugby stardom at Kelston Boys’ High School where Graham Henry was the headmaster. He then went on to play NPC with Auckland before moving south to represent Waikato. He earned major recognition playing Super Rugby for the Chiefs before turning his attention to the international arena where he played for the Pacific Island Teams in 2004. Sione earned his All Black jersey in 2005 and played a total of seventeen tests for his country.

A Sad Day for Rugby

Speaking to the press, Henry said the was really shocked to hear the news. He was completely unaware that Lauaki was struggling. He remembered Lauaki as being a player with exceptional talent although with players such as Jerry Collins and Rodney So’oialo, he was up against stiff competition. Henry continued saying that he had played some excellent rugby for the Chief’s and had probably not reached his full potential at international level.

Lauaki’s former Chief’s teammate, Roger Randle also remembered the star with fondness. While Randle was in his final season when Lauaki joined, the pair played well together. Speaking to the press, Randle said that he was sad to here of Lauaki’s passing. He said that with player’s like Lauaki and Liam Messam leading the forward pack, the team would feel a lot more comfortable.

Meanwhile a minute of silence was held at Brisbane Global Tens in memory of Sione Lauaki. Before the start of their first match on day two, the Chiefs stood in a circle wearing black armbands remembering their fallen comrade who played a total of 70 Super Rugby games for the Chief’s.

Australian’s will remember Lauaki for his formidable prowess on the rugby field and for his incredible talent.