Who Is To Blame For The Bulldog’s Performance? 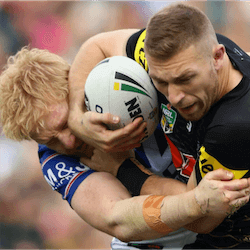 What is Wrong with the Canterbury Bulldogs?

The Penrith Panthers have managed to run riot over the Bulldogs in this weekend’s game, and the latter’s fans are demanding some kind of explanation for the humiliating loss.

Very good performances by Isaah Yeo and Matt Moylan saw the Panthers go on to secure a straight win for the 3rd consecutive time during the Telstra Premiership, with a final score of 38 to 0 at ANZ Stadium.

A Month of Especially Slow Starts

After a month categorised by slow starts, Anthony Griffin’s team racked up a lead of 10 points to 0 in the first 20 minutes of the game, before the tries made by Moylan and Yeo before and after the break extended this into a dominant advantage of 20 points –with just a quarter of the game’s time left.

No Possession for the Ailing Bulldogs

The Panthers starved the Bulldogs of possession with just 43% during the match, and the latter team was uninspiring in terms of attack in restricted opportunities as the Penrith Panthers packed on the points at the contest’s backend.

The Canterbury Bulldogs’ death blow was one that actually took place before the game, as James Graham was ruled out of play after he left the field in the team’s losing game last week with Cronulla and then laboured to gain any field position at all or go-forward.

Bad Player Performances Throughout the Game

Frustrations for the Bulldogs seemed to reach a flashpoint during the game’s 2nd half, when Garvey lashed out at Dallin Watene-Zelezniak, although his apparent reconsideration of the wisdom of punching the player resulted in the attack becoming a pathetic half-slap, adding insult to injury for the embattled team.

Moylan’s move to the number 6 jersey paid off early on when he managed to put a big shot on Kerrod Holland, winger for the Bulldogs, in defence, and forced the ball loose, setting the tone for that side’s  match win.

Following back-to-back penalties, the Penrith Panthers racked up early points thanks to Nathan Cleary putting Corey Harawira-Naera into a gap nearby the line. The young rookie player brushed past Mbye and Elliot, and ensured the visiting team took an early lead.

Canterbury Bulldogs fans are baying for blood after this record loss by 38 points, and viewers of the match have publically expressed how upset they are at the club’s direction both on- and off-field.

One fan wrote of being disheartened, saying that the game was turned off with 20 minutes remaining after having rushed home to see it.

A lot of Bulldog fans blame Des Hasler, stating that he simply does not have what it takes in order to turn his team’s fortunes around, and frustrations for the coach have reached a tipping point. Supporters are demanding that he bow out, after being re-signed for a 2-year deal earlier on in 2017. These results have definitely raised doubt about whether or not sticking with the embattled coach is a good idea.