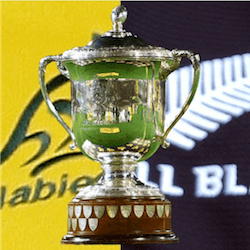 With the Bledisloe Cup safely wrapped up by New Zealand in their two games against Australia during the Rugby Championship, many punters are dismissing Saturday’s final match of the annual trans-Tasman rivalry as a dead rubber. Which it is, of course, but that doesn’t mean the Wallabies won’t be giving all they’ve got.

They’re not a team happy to be whitewashed, especially after recording just one win against the All Blacks in the past seven years, so the visitors can expect a fierce challenge at the Suncorp Stadium. South Africa came within an ace of upsetting the Championship winners ten days ago, with a close-but-no-cigar 24-25 loss in Cape Town, and a fired-up Australia will want to do even better.

Former Wallabies winger Drew Mitchell reckons it all boils down to self-belief, and a switch from defensive to attacking thinking. If Australia have the courage to commit to a daring style of play, he believes, without hesitation or playing safe for fear of making mistakes, they could well deny New Zealand a Bledisloe clean sweep.

The Brisbane faithful will also have the chance to say farewell to one of their own on Saturday, as former Wallabies captain Stephen Moore plays his last Test at his home ground, and his last against the All Blacks.

Australia’s 10th-most capped player is retiring from international rugby after the European Tour at the end of the year, and he’s planning to retire from playing completely after next season’s Super Rugby with the Queensland Reds.

Barrett May Be Out with Concussion

New Zealand coach Steve Hansen is not having as relaxed a build-up to the final Bledisloe match as the odds might suggest. He’s just responded to the critics who opted to blame the narrow margin against the Springboks on an allegedly ‘past it’ Sonny Bill Williams, pointing out that the giant centre can’t win: if he plays an attacking game, he’s too flashy, but if he retreats into solid defence as he did against South Africa, there are cries that he’s lost his flair.

A bigger problem for Hansen might be fly-half Beauden Barrett, who is being monitored for concussion after suffering dizzy spells and headaches after taking a knock to the head against the Springboks. At the time of writing, it wasn’t clear whether the Kiwi star will be declared fit for Brisbane.

Online betting sites are offering $5.00 and up on a Wallabies victory, as opposed to the All Blacks at $1.17.